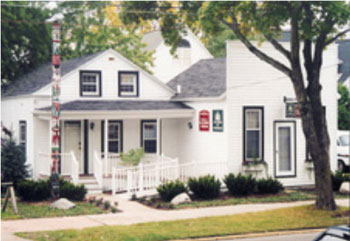 Northern Michigan has a rich history. The area north of Harbor Springs near Good Hart has had many names over its history. The first settlers, the Native Americans, called it L'Arbre Croche or Crooked Tree. A large tree with a crooked trunk located at the foot of the Lamkin Hill drive just down from Good Hart was a visible marker on Lake Michigan for canoes coming into shore.

The Lake Michigan shoreline was a natural gathering place for Native Americans and large populations settled in what is now Harbor Springs, Seven Mile Point, Good Hart, and Cross Village. Middle Village was the half way, or middle spot, between Harbor Springs an Good Hart.

Andrew J. Blackbird was born in what is now Harbor Springs around 1815. His father was an Ottawa chief named Mack-e-te-be-nessy (Makade-binesi, "black hawk"). The name was mistranslated as "Blackbird", which became the family's English name. Mack-e-te-be-nessy was chief of the Arbor Croche, or Middle Village band of the Ottawas. Andrew was trained as a blacksmith but enjoyed education and attended Twinsburg Institute in Ohio and Michigan State Normal School, now Eastern Michigan University.

During the 1850s, Blackbird was a counselor for both the U.S. and Ottawa and Ojibwa peoples and worked to help Native American veterans receive pensions. He helped settle land claims and worked to achieve citizenship for Native Americans. He married and bought a house in Harbor Springs. He became the town's second postmaster in 1858.